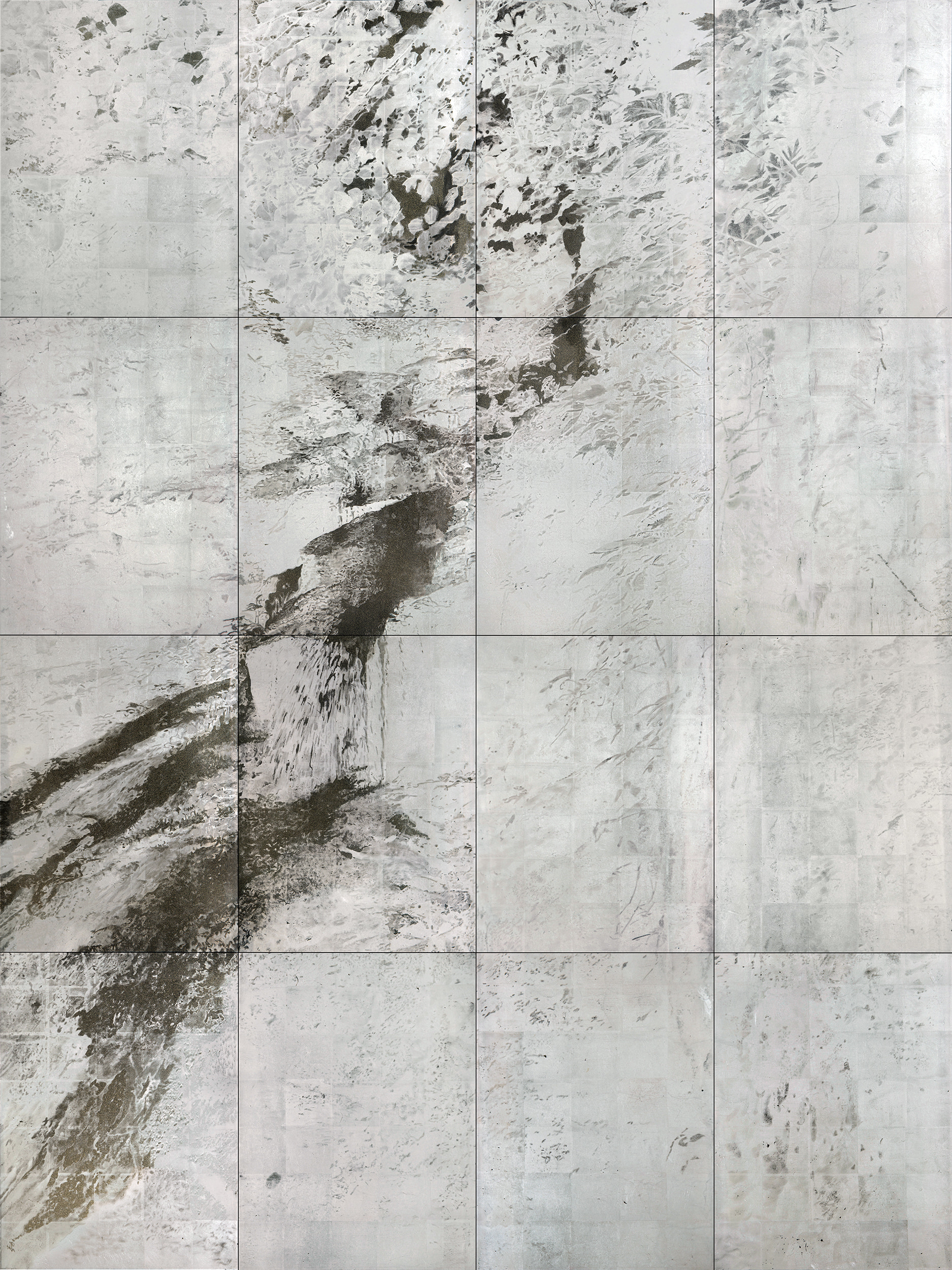 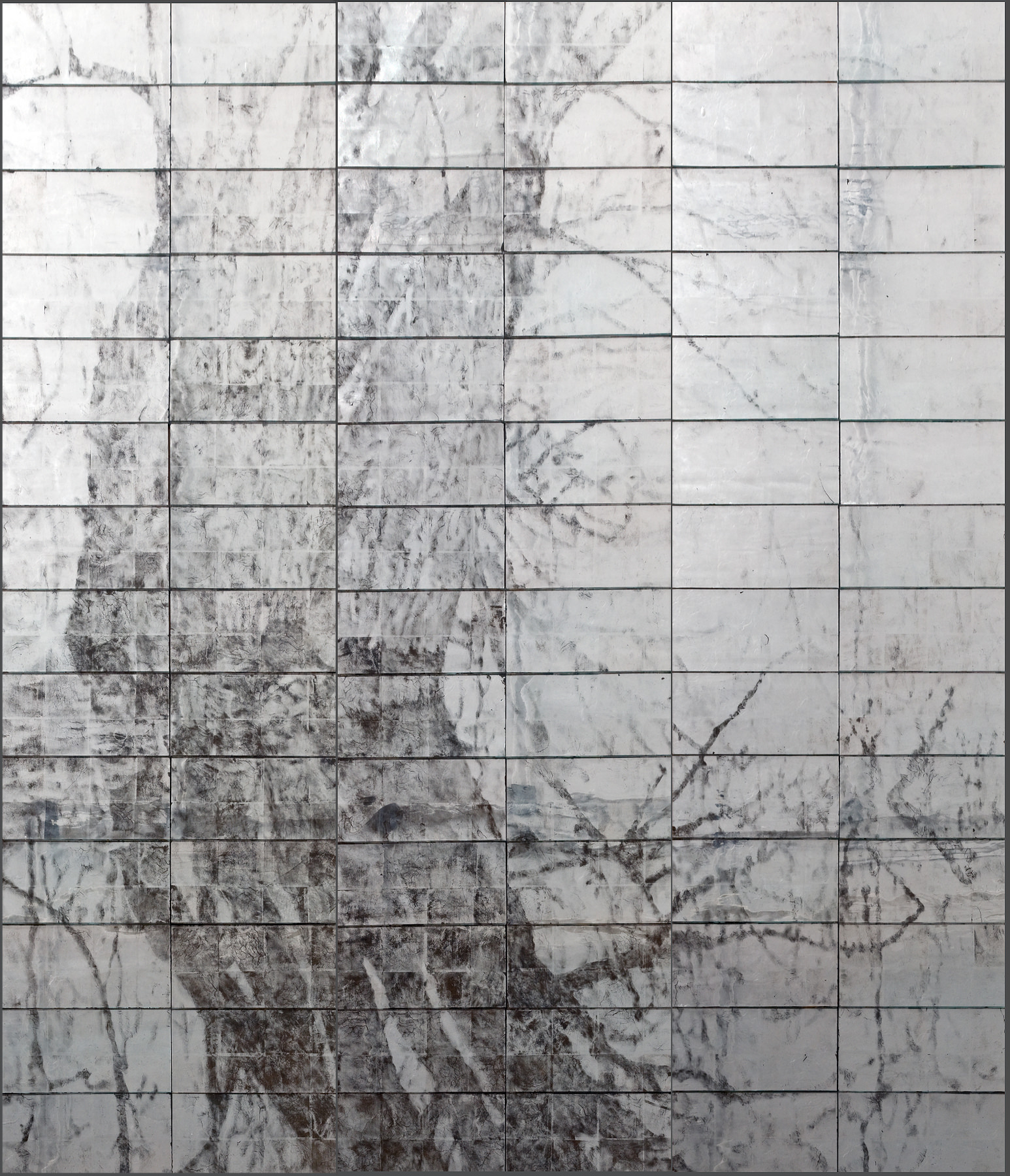 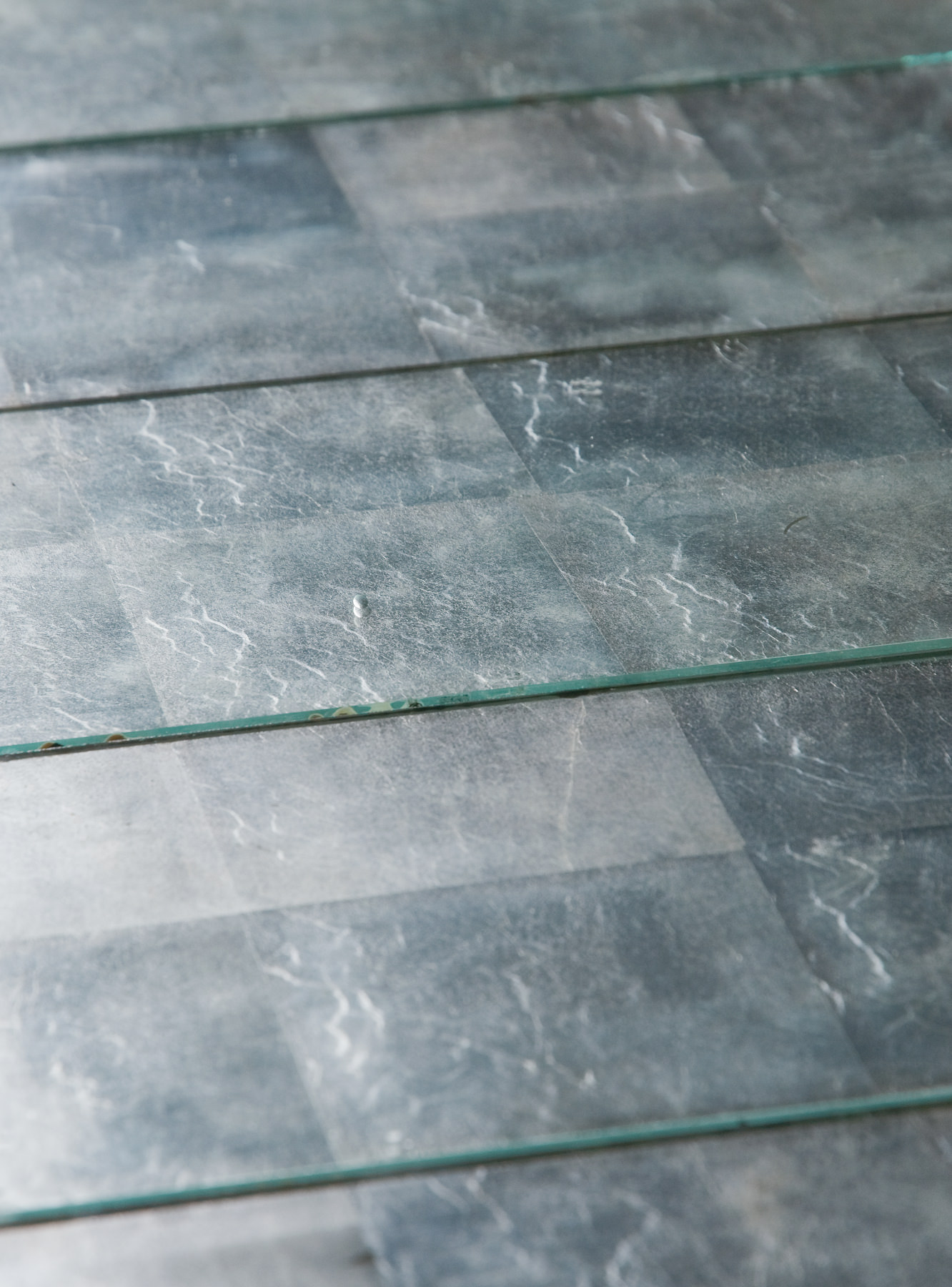 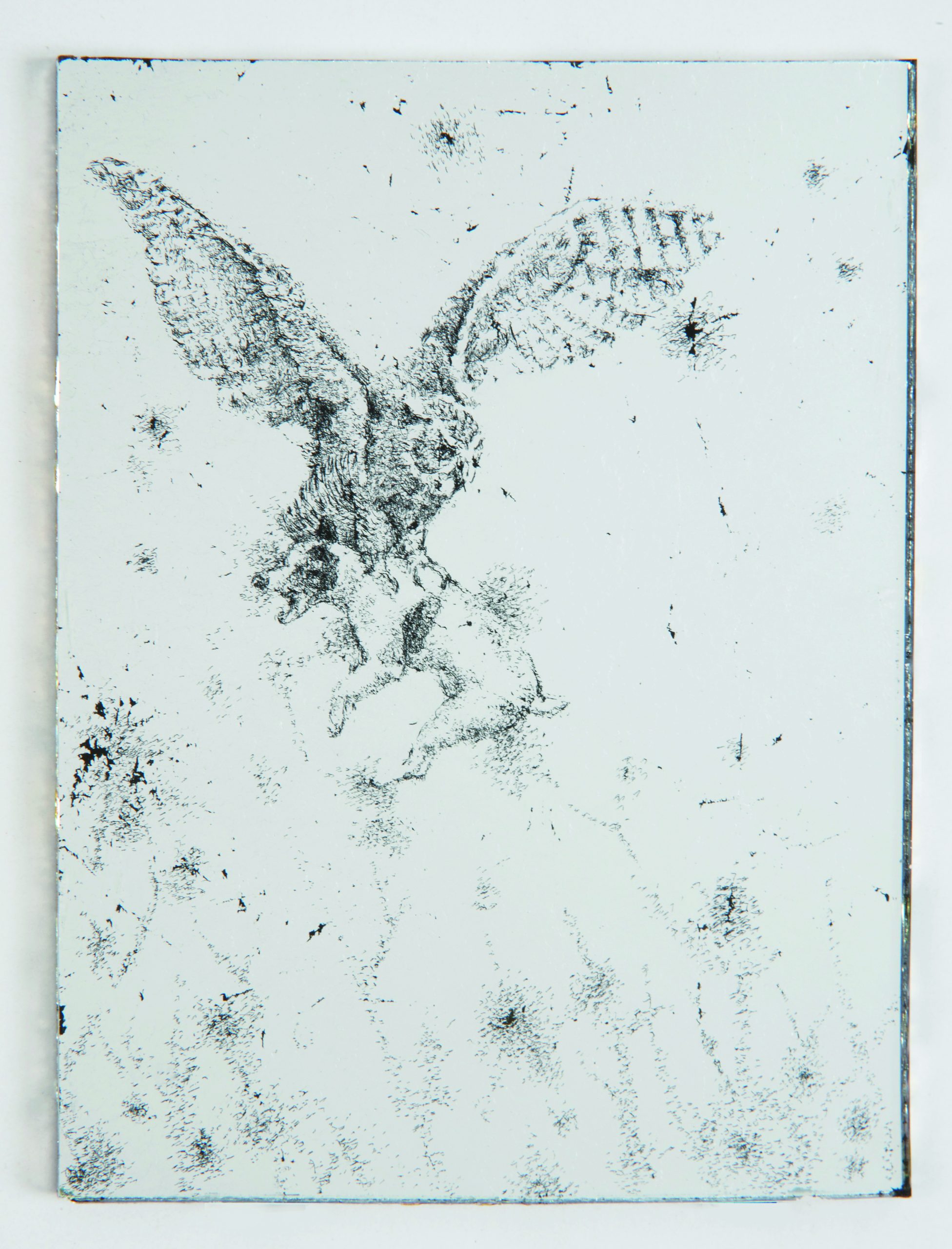 2004
This piece was made using the verre églomisé technique in which hundreds of pieces of sterling silver leaf are adhered to the back of glass using a gelatin size. An image is then engraved on the leaf with a stylus. The engraving is sealed with paint and the glass is turned over so that the image is viewed in reverse.
533.4 x 213.6 x 1 cm 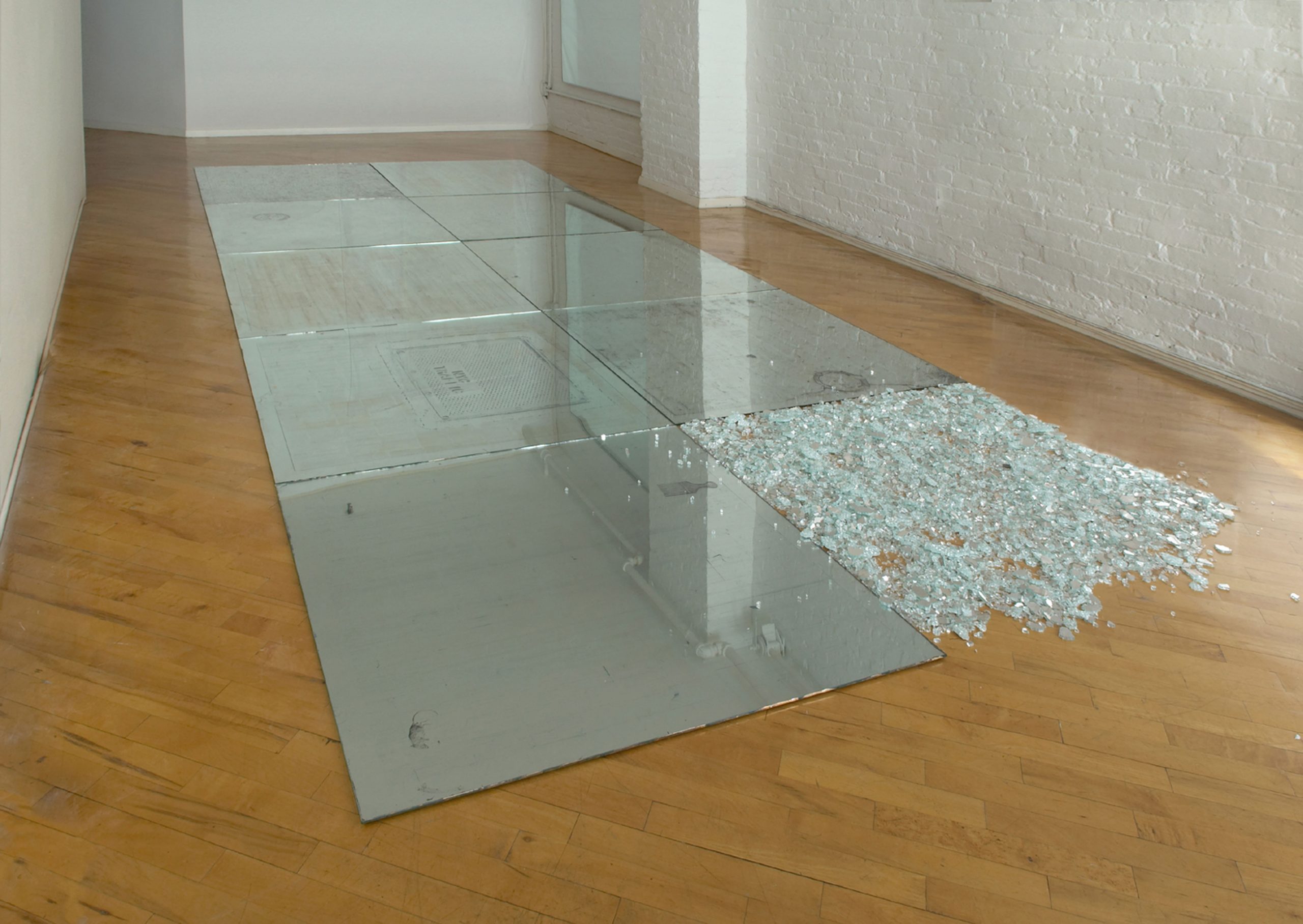 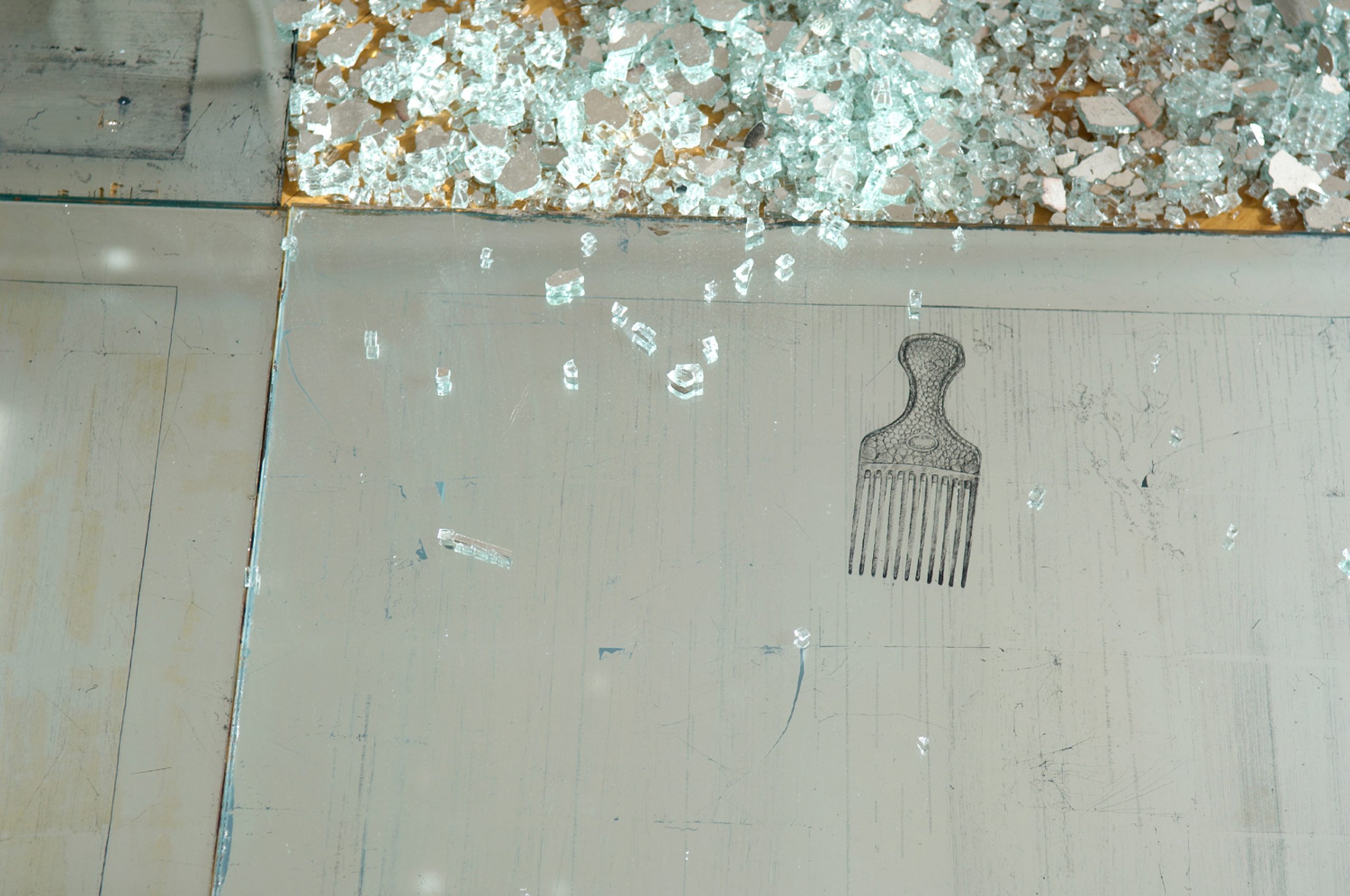 Anne Peabody was born in 1967 in Louisville, USA, and lives and works in Brooklyn. She is a multimedia artist-often working with glass, light and sculpture-who describes her works as portraits of folklore, secrets, and confessions depicted in images drawn from both urban and rural landscapes.

She studied at Washington University in St. Louis, Missouri, and, in 2004, received her MO and MFA from the School of Visual Arts in New York. For her MFA, she received an Alumni Thesis Award for her installation, the transposition of a stretch of the sidewalk outside her Brooklyn apartment onto silvered glass. The sidewalk, a faint impression of its former self, is re-proposed as it once appeared, on the ground. She transformed the gallery space into a reinterpretation of the familiar, her focus on the ethereal notions of memory and subjective consciousness; recognizing the impermanent nature of conscious life. Her works on silvered glass are created using a technique stemming from églomisé, a French glass-gilding technique popularized in the eighteenth century, whose ephemeral results emphasize the delicacy of the subject-matter, based for the most part on the realm of the subconscious and on the artist’s dreams. Given the nature of her chosen medium, light is a vital participant in the elusive compositions. Her work can be found in prestigious permanent collections such as the 21c Museum, Louisville; The Anaconda Aluminum, Lexington, Kentucky; and Berengo Studio, Murano. She has exhibited her works in Glasstress (2009, 2011), Venice; Van Gogh Museum (2013), Amsterdam; the Kentucky Museum of Art and Craft (2013), Louisville; and Wave Hill (2015) Bronx, New York. She was selected by a group of international curators for Glass Quarterly as one of the “50 Best Artists working in Glass” (2012); she was awarded a MORE Art residency (2014) and was a recipient of the DuMBO Space Program (2015-2018), both New York.