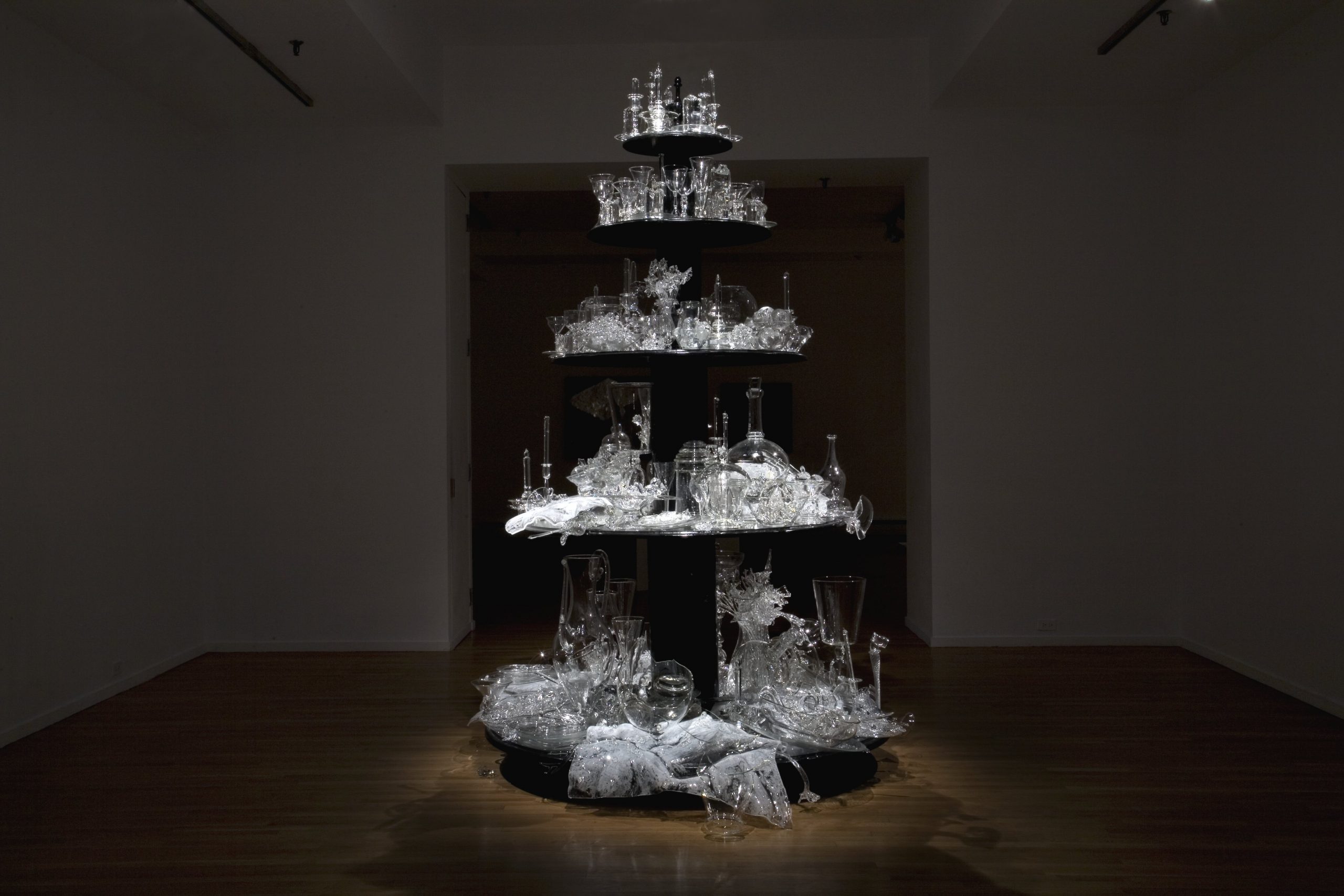 Beth Lipman was born in 1971 in Philadelphia and lives and works in Sheboygan Falls, Wisconsin. Optimizing clarity, fragility, and the absence of color of glass, her opulent sculptures and photographs of meticulous, glass-based compositions are a contemporary response and homage to still life paintings from the seventeenth to twentieth centuries.

She studied at the Tyler School of Art, Temple University, in Philadelphia (1994), the Massachusetts College of Art in Boston, and the Pilchuck Glass School in Seattle. One can draw a direct parallel between the tradition of still life painting and art made from traditional craft processes, for instance glassmaking, and Lipman explores these possibilities in her studio practice: “Every object created, whether broken, ‘flawed’ or ‘perfect’ is incorporated into the final composition, literally capturing a moment in time. The process of creating defines the final composition; mimesis is abandoned. Mortality, consumerism, materiality, and temporality, critical issues since the inception of the still life tradition in the 17th century, continue to be relevant.” Her work is in the permanent collections of the Brooklyn Museum of Art, the Smithsonian American Art Museum, and the Corning Museum of Glass, in New York, among other prestigious international institutions. Her work has been exhibited internationally including exhibitions at Museum of Art and Design (2010), Heller Gallery (2010) and Claire Oliver Gallery (2012, 2013, 2015), all New York; New Britain Museum of Art (2014), Connecticut; Stephen D Paine Gallery, Massachusetts College of Art and Design (2014), Boston, and Montgomery Museum of Fine Arts (2015), Alabama. She is the recipient of numerous awards including a Louis Comfort Tiffany Foundation Grant (2005); Young Talent Award, UrbanGlass Awards Dinner (2006), New York; Wisconsin Arts Board Fellowship (2008); Pollock-Krasner Foundation Grant (2012); Smithsonian Artist Research Fellowship (2013); First Place Grant Recipient, Virginia Groot Foundation (2014); and was Artist in Residence at the Museum of Glass (2016), Tacoma, Washington.